Abi wanted some Luc Besson, and the rest of us had no complaints, so this week we have a slight anomaly of a ‘Spoiler Filled’ episode as we choose a film that actually makes the IMDB Top 250 films of all time! (sell-outs!) We present to you the 1994 film with a million names ‘Leon: The Professional’ (a.k.a. Leon a.k.a. The Professional a.k.a. whatever) and see what happens when an almost super-human, childlike assassin meets the most unnervingly mature pre-teen girl and the most corrupt and evil cop ever. Don’t forget to pour yourself a nice glass of milk and make sure your potted plants have been watered as we experience Besson’s ‘improperly socialized’ characters, a clash of American and European sensibilities and a surprisingly obvious parallel with Roald Dahl. So, don’t forget to tell everyone about it! What do I mean by ‘everyone’? I mean, you know, a lot of people. 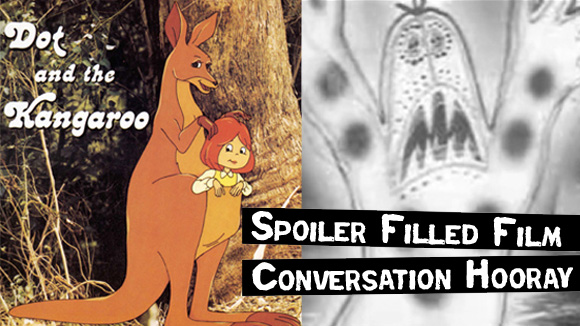 Just how come the most bleak and depressing movie that Rich knows happens to be an Australian, low-budget children’s animated movie from the 70’s? Well, that’s what He, Abi, Ant and Jamie are here to discover this time as they get lost in the perilous outback that is 1977’s ‘Dot And The Kangaroo’. Get ready for a lot of tonal and emotional whiplash from this fever dream that has haunted Rich since childhood, as we follow the exploits of the meanest little girl with a 40-year-old smoker’s voice, as she gets needlessly and hopelessly lost in the Australian Outback with only an emotionally damaged Kangaroo to help her home. So, if you want to hear about the pompous platypus, the cocky kookaburra, disturbed ducks, microscopic budgets and terribly, TERRIBLY annoying songs, then you’ve come to the right place. We should thank the forest spirits for the brief beacon of wonder that is the ‘Bunyip’s Song’. 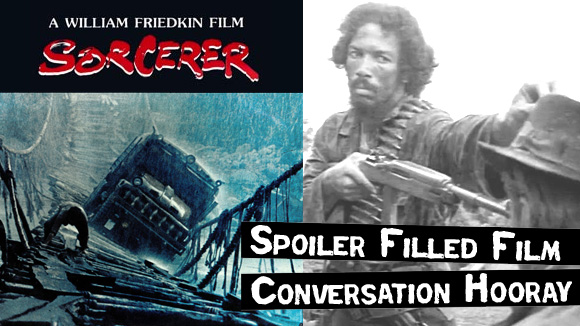 “An assassin, a terrorist, a fraudster and a thief are driving a truck full of nitroglycerin…” Is it the start of one big joke or is it all part of Jamie’s grand plan to review anything and everything even remotely connected to The Exorcist? This time around it’s the director William Friedkin’s next filmic effort, the somewhat confusingly named ‘Sorcerer’ from 1977, said to be one of the last films of interesting and challenging cinema coming out of America in the 70’s. With no magic. Or pointy hats. Instead we have 4 sweaty criminals from around the world driving through the South American Jungle and hoping not to explode along the way. Rich and Abi join Jamie this time around to discuss the troubled production of the film, Roy Scheider’s constant ‘strop-ons’,whether it is one of the most violent P.G. ratings ever and discover who would also like to see a remake with British comedians. 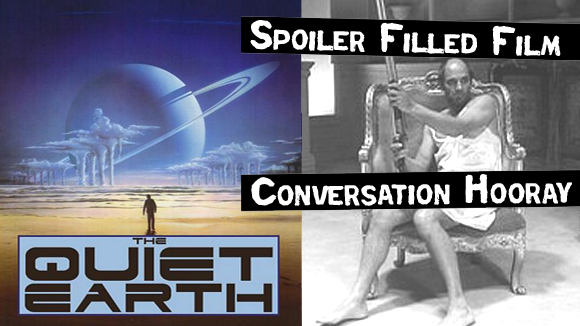 Join us on our mythical quest, as the Fellowship of Spoiler Filled journey to the far off land of Middle Ear…Oh alrite, it’s New Zealand! They’ve done more than hobbits and adventurous quests, you know. They’ve also done post-apocalyptic isolationist sci-fi. Well, what else are you gonna do with all that beautiful wide open space? I am, of course, talking about the 1985 cult movie The Quiet Earth, which is about one of Earth’s last survivors as he wakes up to find the planet deserted. Will this new world become his endless playground or his own personal form of hell? Join Rich, Ant and Jamie this time as they bring up for discussion such things as ambiguous endings, bald men in negligés and just where does someone get a lifesize cardboard cutout of Hitler and The Pope.

We apologise for some lesser sound quality, Ant recorded this in our New Zealand branch underground science bunker.

‘Spoiler Filled Film Conversation Hooray!’ would like to bestow upon you ‘The Long Kiss Goodnight’, a 1996 action movie from the writer of the Lethal Weapon series, which one of our members may describe as ‘Die Hard…with a woman’! It’s Abi’s choice this week, so join her, Rich and Jamie as they traverse the numerous explosions, smashed windows and witty banterings of this somewhat forgotten about gem. So, if there are any mums out there with a secret appreciation for action movies, come and join our discussion on nightmarish deer animatronics, calling your appallingly cruel villain ‘Timothy’ and just how many ‘tops’ this movie manages to get ‘over’. The movie also stars an indestructible Samuel L. Jackson (sorta).