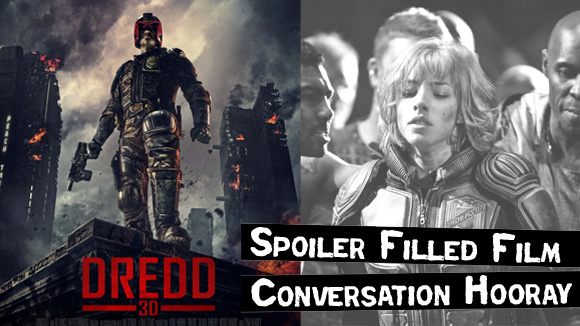 Yes, ‘Dredd’ is here, and his movie will be judged. Was it a crime to try again with this 2012 film? Jamie brings the question to the ‘Spoiler Filled Film Conversation Hooray’ court, and now Rich, Ant and Abi will make the verdict. Will it be thrown off the top of a building like everyone in it? As it turns out the whole jury liked it, leading to much shenanigans when they confusedly try to be negative and pull it apart out of sheer habit, but they do let if off. Be happy, people! Eventually, they settle on the good bits, which include Karl Urban’s chin, the bravery of being in a helmet all movie, the 3-D supposedly being actually good, the bravery of the villainous actress, the possibility of the Dredd bubble gun on slow days, the integration of a good female character into an action movie, and the straightforward and brisk storyline. Movie reprieved. (Ep 67, Rec 2014)

We are 'Spoiler Filled Film Conversation, Hooray!', a podcast where a bunch of Welsh people talk about films and stuff. View all posts by spoilerfilled